We would like to offer our sincere support to anyone coping with grief. Enter your email below for our complimentary daily grief messages. Messages run for up to one year and you can stop at any time. Your email will not be used for any other purpose.

Share a memory
Obituary & Services
Tribute Wall
Read more about the life story of Kamau and share your memory.

Kamau was born March 3, 1995, at Trident Medical Center in North Charleston, SC. He graduated from Berkeley High School in 2013. At an early age, Kamau became known as the family handyman and showed his gift with seeing and making things come together. He went on to be a swimming instructor, lifeguard, and soccer coach at the Moncks Corner YMCA, Later he became credentialed in mixed gas diving, surface supply air diving, commercial diving, and advanced scuba diving. He was and has always been a water baby. He also obtained a certificate in First Aid and CPR which helped lead his way to helping other, including children and adults.

In 2017, he accepted and gave his vows to his loving wife Jocelyn.

With the help and encouragement of his Ganny and his wife Jocelyn, Kamau went on to join the United States Army and became a Parachute Rigger in 2017. In the year of 2018, cancer became a part of his life. With the love and support of his Wife, Ganny, Mom, Grandma and family he fought vigilantly for four and a half years to the very end. While fighting, he worked and was due for graduation in December 2022 for his Bachelor's of Science Degree for Robotics Engineering. He was a true Man, Great Husband, Son, Grandson, Brother, Friend in Battle to many.

To send flowers to the family or plant a tree in memory of Kamau Quinn Stanback, please visit our floral store. 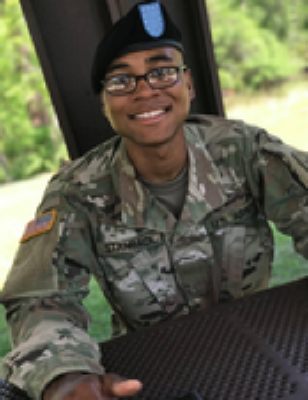 In Loving Memory Of

Look inside to read what others
have shared
Family and friends are coming together online to create a special keepsake. Every memory left on the online obituary will be automatically included in the book.

In Loving Memory Of

Look inside to read what others have shared


Family and friends are coming together online to create a special keepsake. Every memory left on the online obituary will be automatically included in the book.

Please note
The public viewing will be held two hours before service on Saturday from 11:00AM to 1:00PM ONLY!